This first day cover was designed by William Von Ohlen. The all-text cachet gives a very brief biography of Dante as follows:

Dante was born in Florence, Italy. His parents died when he was young and Brunetti Latine, a statesman, supervised his education. Many scholars think that he studied philosophy at Bologna and Padua, and theology at Paris. Since the 1800s Dante has been regarded as one of the world's greatest poets. Chaucer & Milton imitated him, Longfellow, Shelley & Hugo praised his perfect style, and his sincere poetic character. Two outstanding works are his New Life and the Divine Comedy. Dante held high political office in Florence, but a hostile political faction exiled him in 1302. 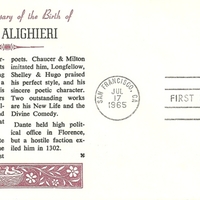