Chickering's cachet features a reversed detail from Eugène Delacroix's first major painting, Dante et Virgile aux enfers (known in English as The Barque of Dante or Dante and Virgil in Hell). Above this detail is a depiction of the storm of lustful sinners from Inferno 5. Text from the top of the cachet down reads: "Dante Alighieri / Poet · Philosopher / of the Middle / Ages"; "Dante and / Virgil in / Hell"; "Born in / Florence 1265"; and "First Day of Issue" beside which are the names Jackson and Chickering. 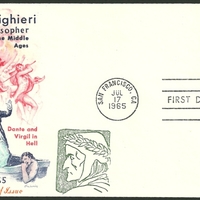