The cover for Rockwell's painting The Eleventh Hour was paired with the 1965 Dante commemorative stamp and was cancelled in San Francisco on July 17, 1980, fifteen years to the day after the stamp was first issued. The accompanying album text explains the link between the college students in Rockwell's painting and Dante, "one of the greatest scholars of the ages." 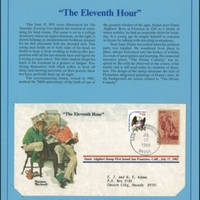