This stamp is part of a set of eight celebrating 90 years of Mickey Mouse in Italy (1928–2018). The set is the 33rd issue in the series "Le Eccellenze del sistema produttivo ed economico" (The excellencies of the productive and economic system).

The stamp shows Mickey Mouse as Dante and Goofy as Virgil as illustrated by cartoonist Giorgio Cavazzano after Angelo Bioletto's comic strip version of Inferno published from October 1949 to March 1950 in Topolino. On the left side of the stamp is text as follows: top: "Disney" (logo); middle: "90 ANNI di / TOPOLINO" (90 years of Mickey Mouse); bottom: "ITALIA / € 0,95". Vertically, along the right side is: "© Disney". Along the bottom edge of the stamp is the abbreviated name of the printer: "I.P.Z.S. S.p.A. - ROMA - 2017" (Istituto Poligrafico e Zecca dello Stato).

This is the only stamp in the set of eight that also was issued in sheets of 28 stamps. 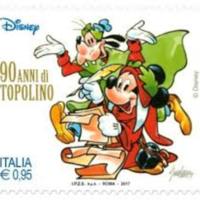