These are the first postage stamps ever issued that feature Dante and the first Italian postage stamps to feature an author.1 One of the first descriptions of these stamps is perhaps the best: the following account appeared in the October 1, 1921, issue of The Stamp Collectors' Fortnightly and International Stamp Advertiser:

From Il Giornale d'Italia, September 15th, 1921, kindly forwarded to us by our esteemed colleague, Dr. Emilio Diena, we get our first glimpse of the designs for the stamps issued to commemorate the Sixth Centenary of the death of Dante Alighieri, Italy's greatest poet, and the exalted creator of the 'Commedia' to which the world has added the 'Divina' in token of its sublime grandeur.

'To-day,' states Il Giornale, 'the Ministry of Posts issue the new stamps dedicated to the Dante Centenary. It is the first time that the Italian government has interposed such an issue among its postage stamps, but Dante is worthy of such an exception.

'The 15 centesimi shows the eagle, bearing the open book of the "Commedia", and around the verse [from Inferno 4:96] Che sopra gli altri com' aquila vola—(He who is above others as the eagle flies).

'The second, 25 centesimi, depicts Italy seated on a throne, crowned with a laurel wreath, holding up in one arm the sacred poem. Motto [from Inferno 4:80]: Onorate l'altissimo poeta—(Honoured be the most exalted poet).

'The third stamp, 40 centesimi has a picture of the poet to the middle of the bust, within a pulpit in the act of expounding his own book. Motto [from Purgatorio 7:17]: Mostrò cio che potea la lingua nostra—(He shows that of which our tongue is capable).

'All bear the initials S.N.D.A. (Società Nazionale Dante Alighieri) for the issue is made for the benefit of that patriotic and deserving society for the protection and guardianship of the Italian abroad and at home. Thus it was petitioned at the Congress in Trieste, and so it will be followed by the Congress at Trente on September 17th.

'For a short period they will be sold for the regular franking of correspondence. And the few that remain unsold will be sought after by the collectors now so numerous throughout the world.'

We learn from Il Corriere Filatelico that 400,000 sets of the Dante issue have been printed.2

A gray version of the 15-centesimi stamp exists but was not officially issued. The gray version was discovered in September 1943; gray is thought to have been the color originally intended for this stamp in the series.3 Stamps with the "B.L.P." (Buste, Lettere, Postali) overprint also are known, however these were not regularly issued.4 B.L.P. stamps were issued at a discount for use by charities serving veterans of World War I. Sassone catalogs over two dozen varieties for this series including examples of printing, cutting, and perforation errors as well as stamps exhibiting different watermarks. 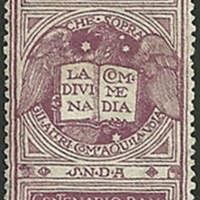 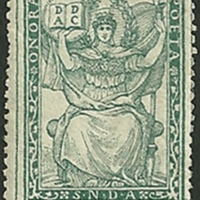 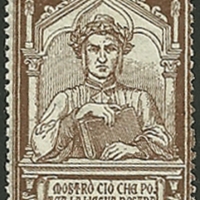 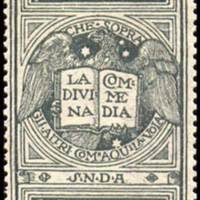