This postage stamp was issued by the United States to commemorate the 700th anniversary of Dante's birth. The stamp was designed by American artist Douglas W. Gorsline and features a portrait of Dante holding a book labeled "Dante"; in the background is a city and above the poet is an angel holding a banner on which is "700th ANNIVERSARY". Gorsline's portrait was inspired by the anonymous 16th-century "Allegorical Portrait of Dante" in the National Gallery of Art in Washington, D.C. The stamp was printed by the United States Bureau of Engraving and Printing.
Denomination: 5 ¢ (0.05 USD)
Perforation: 10 ½ × 11 (line)
Printing process: Rotogravure
Print run: 112,000,000 authorized; 115,340,000 issued 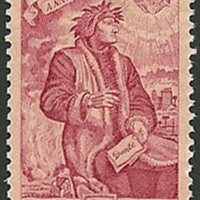 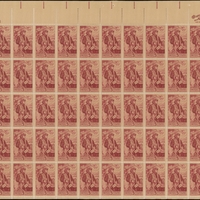